The General Linear Model function is the main command in Array Studio for running analysis on data. It is the recommended option for most, if not all, experimental designs. It allows the user to model the data on a variable-by-variable basis. The user can specify a fixed, mixed, or random model. Estimates, fold changes, p-values, prediction dataset, and confidence intervals can generated using this model. For the more casual user that may think of terms like One-way ANOVA, Two-way ANOVA, Repeated Measures ANOVA, ANCOVA, etc., this model should be used. 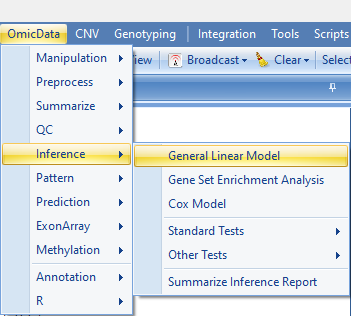 Users can use these methods to see whether their data is normally distributed. Array Studio can plot kernel density of samples, and summarize skewness and kurtosis to check how well their data approximate a normal distribution.

For data that do not follow a normal distribution, the user can consider transformation or normalization.

For NGS count data that follow a negative binomial distribution, the user can use interference methods such as DeSeq2. 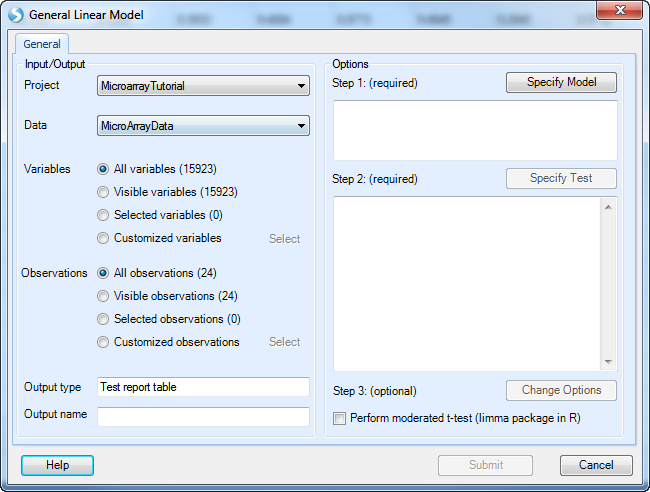 Note: for moderated t-test (limma package R) option, all data in the Microarray table has to be numerical. In case there are dots in the table, see [Imput](http://www.arrayserver.com/wiki/index.php?title=Impute.pdf) to replace all dots with 0.

The factor(s) used in your statistical design should only use characters in A-Z a-z 0-9 _ (underline) and . (period). Please note, for some R tools/packages implemented into Array Suite, only letters, numbers, dots, and underline characters are allowed for variable names or column names. 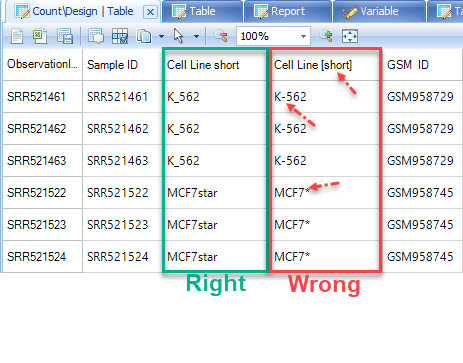 The Options section for the Linear Model window include 3 steps, which must be filled out in order:

This is where the user will specify the terms of the model. Getting the terms correct for each individual experiment is key to a successful General Linear Model. Clicking Specify Model opens the Specify Linear Model window, which has two sections: 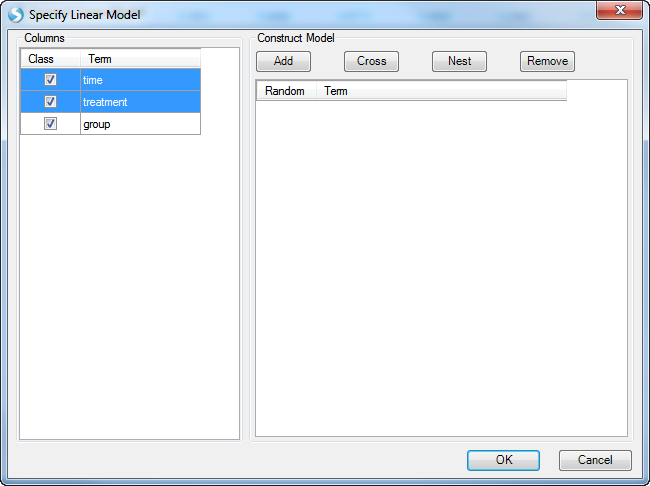 This includes any particular comparisons the user is interested in, along with other tests (F-tests, variance, etc.).

From the left side the user can pick from the terms in the model (from Step 1). The user has the option of manually building estimates (ttests) for each comparison or using the "For each" option to let Array Studio generate multiple estimates at once. This is discussed in more detail below. In the Options section, the user can decide whether Estimates, Fold changes, Raw p-values, Adjusted p-values, Generate significant list, and Split significant list (by direction) will be created for the Inference report generated by this command. Clicking the Add button will add the specified estimates to the Ttests section. 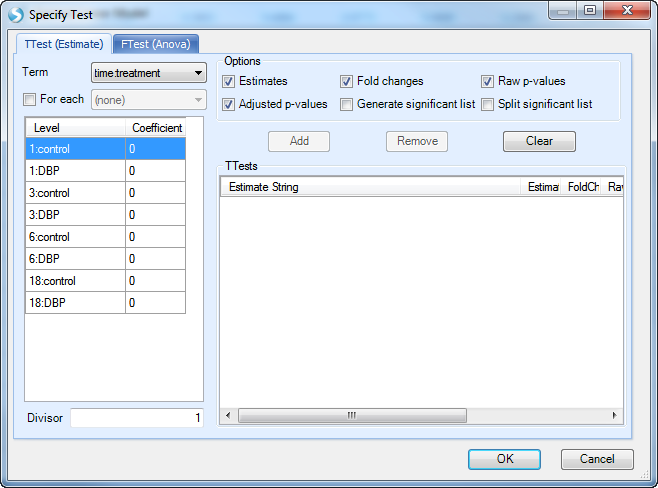 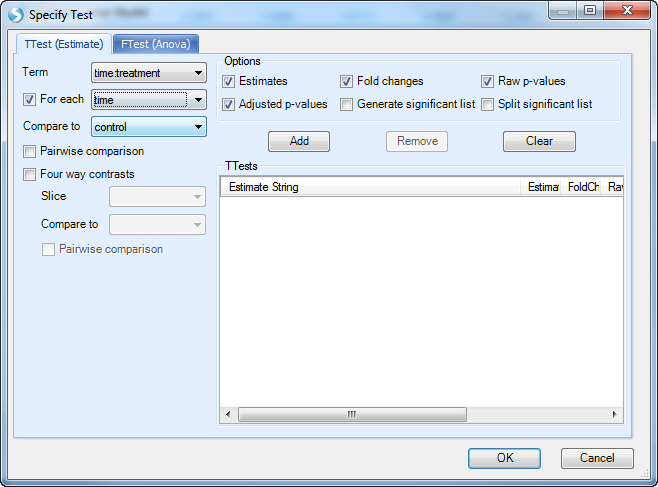 Options: Users can specify which parameter estimates for the TTest will be output.

The FTest(Anova) tab can be used to generate FTests for any of the terms in the model. In this window, the user can add any of the terms (as well as the Residual) form the model. Options for output from the FTests include Raw p-values, Adjusted p-values, Coefficients, Variance components, and the generation of significant lists. Clicking on one or more terms in the Terms box, selecting options, and clicking Add will add the FTests to the FTests box. This is shown in more detail below. 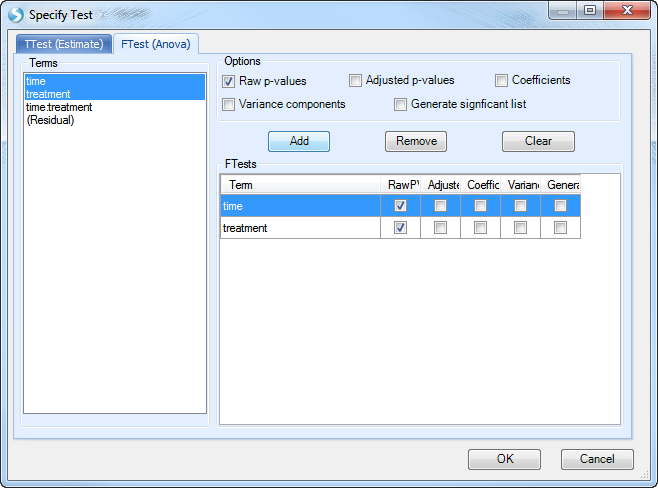 Options: Users can specify which parameter estimates for the FTest will be output.

This step provides the user with some additional options available for change (adding LSMeans data, prediction dataset, Multiplicity Adjustments, confidence intervals, etc.). While this is considered optional, the user should verify these settings before proceeding. 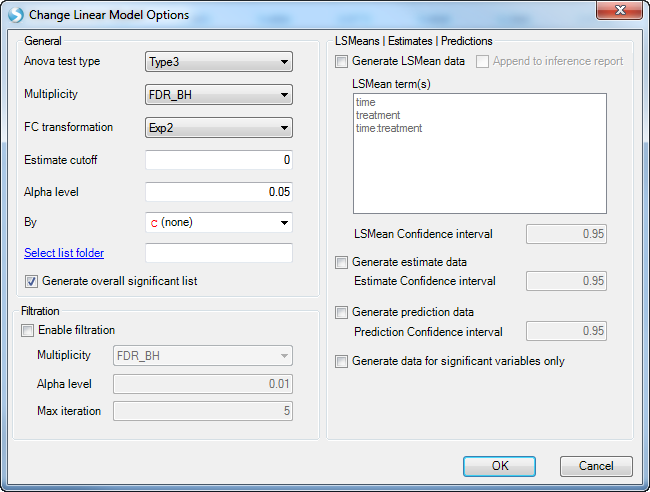 Note: The Multiplicity adjustment takes into account the total number of tests performed within a given analysis. There is the ability to set the default option to adjust p-values on a per-test basis. Please refer to "[ Statistics]" section of the User Guide for details.

The Filtration section allows the user to implement the special Filtration available in Array Studio. For each variable, a GLM will performed to have a variance estimate for error term and a residual for each observation. Based on this, a p value would be calculated for each observation's residual according to a T-distribution. A further adjust p value would be generate by the defined Multiplicity method. The observation with adjusted p value less than Alpha level would be removed and new GLM would be performed for this variable without outlier. Filtration is a useful feature which filters out outliers in statistical inference and hence yields higher power. Filtration is especially useful for noisy data, such as microarray data which usually contain a lot of extreme observations. Enabling this feature in Array Studio helps find more deferentially expressed genes and increase the power. However, in studies with low numbers of observations, Filtration is not recommended. Filtration is not checked by default.

Perform moderated t-test (limma package in R): The moderated t-test is used to rank genes in order of evidence for differential expression. They use an empirical Bayes method to shrink the probe-wise sample variances towards a common value and to augmenting the degrees of freedom for the individual variances (Smyth, 2004). The empirical Bayes moderated t-statistics test each individual contrast equal to zero. For each probe (row), the moderated F-statistic tests whether all the contrasts are zero. The F-statistic is an overall test computed from the set of t-statistics for that probe. This is exactly analogous the relationship between t-tests and F-statistics in conventional ANOVA, except that the residual mean squares and residual degrees of freedom have been moderated between probes. http://rss.acs.unt.edu/Rdoc/library/limma/html/ebayes.html

Array Studio will generate an Inference Table in the Inference tab of the Solution Explorer, with a name ending in .Tests. Several Views will be generated automatically, including a VolcanoPlotView and a TableView.

Notice in the example shown below that the VolcanoPlotView will show each individual VolcanoPlot for each test generated by the model. 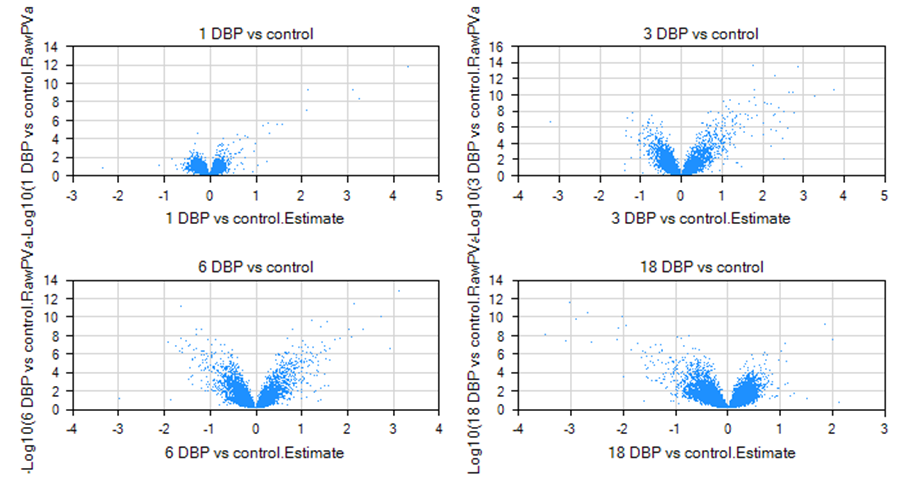 The TableView will list all of the columns that have been generated by the model. This could include raw pvalues, adjusted pvalues, fold changes, estimates, etc. for each requested estimate. In addition, columns will be generated if Ftests generation was requested. The Annotation Table will also be attached to this Table. Making use of the Filter tab in the View Controller will enable the user to quickly filter by pvalue, fold change, etc., if the Lists generated by the model are not sufficient. An example TableView for the Inference Report is shown below.

As with any TableView, any information in the table can be exported or saved at any time. 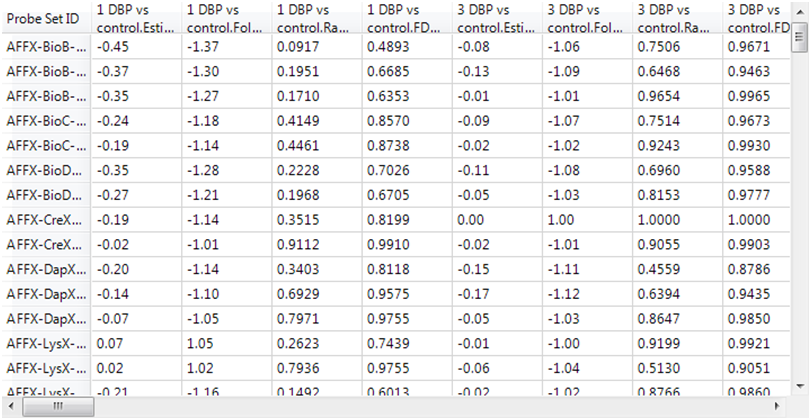 Differing views will also be generated if the user selected options for LSMean, Estimate, or Prediction data.