In RNA-Seq datasets, fusion genes can be detected based on both paired- and single-end reads. In a paired-end NGS dataset,a discordant read pair is one that is not aligned to the reference genome with the expected distance or orientation. If a set of discordant read pairs are mapped to two different genes, a fusion gene is suggested (Fusion PE detection). On the other hand, single-end reads that span the fusion junctions provide base-pair evidence for the fusion events (Fusion SE detection). (also reads Ge, H, et al. "FusionMap: detecting fusion genes from next-generation sequencing data at base-pair resolution." Bioinformatics 27.14 (2011): 1922-1928.) 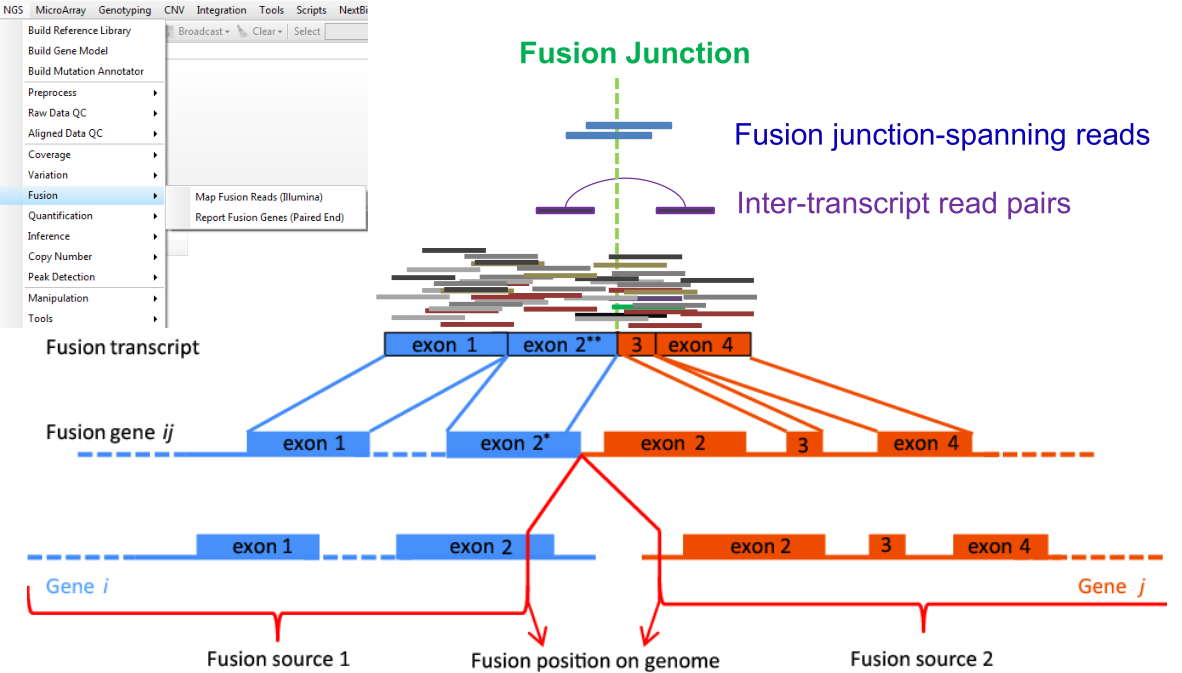 If you have ArrayStudio License, you can run the fusion detection easily through its GUI. Please read the following two guides:

If user is using Oshell to do fusion detection, it can be done through MapFusionReads and ReportPairedEndFusionGenes function. Examples:

If user is using FusionMap, it can be done through semap and pereport subcommand.

We usually recommend users to use relaxed parameters to run fusion detection and then use varied filters to remove false positives. The fusion table could be very big especially when user merges fusion results from many samples and with relaxed detection parameters. Below are useful information to reduce false positves:

Fusion candidates involving genes in this blacklist will be marked as InBlackList.

If the value is InFamilyList, it means the gene pair belongs to the same gene family (defined by HGNC). If the value is InParalogueList, it means the gene pair does not belong to HGNC based gene family, but they belong to two genes that are in the same paralogue group (defined by Ensembl v74, which we finally downloaded the database from Biomart). If it is SameEnsemblGene, it means that these two genes actually are overlapping a “super” ensemble gene (note the fusion comes from UCSC gene model).

In the RNA-Seq datasets, studies have shown that most of fusion junctions are exon-exon splice junctions of fusion genes. A TRUE fusion junction is likely to preserved a canonical splice pattern: GT-AG (~98.71%), GC-AG (~0.56%) and AT-AC (<0.05%). You can use the filter panel on the right to reduce false positives by selecting:

In the Fusion SE report, there is one more column for FrameShift prediction. Three nucleotide position in each frame is note as position 0, 1, 2. [012][012][012] is amino acid coding pattern. If the FrameShift jumping from gene A to B is 0->1, 1->2, 2->0, then there is no frame shift in both gene A and B due to the fusion event. User can filter the result by

By computing the genomic distance between two fusion breakpoints, we can infer the fusion type: read-through or translocation. For fusion A-B, we can create a value column by

More filters can be applied outside of Omicsoft

SE and PE are two independent approaches to detect fusions. We can add a column to PE and SE fusion result tables showing the agreement between SE and PE detection for each fusion. The value in this column can be a statistical testing score, such as the Fisher exact test. Such test can only be done after we merge fusion results from a group of RNA-Seq samples.

Gene expression of two fusion partners and their fusion product

Based on them, we can create additional filters, such as

If User have many samples and want to group them in genome browser, the SAM files have to be imported into a project as NgsData and attach it with sample design. Below is one example based on 130 TCGA BAM files:

Once, fusion alignment files are loaded in genome browser, user can jump to any fusion locations from fusion table by right clicking on the row name in either result table or detail table: 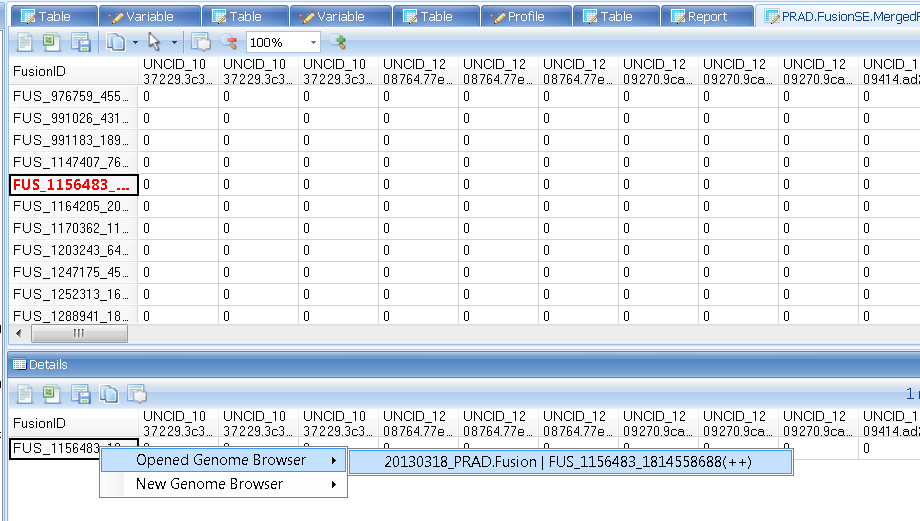